What does the brain look like when we’re able to be productive?

Most productivity apps on the market aren’t effective for their users because they don’t take something very important into account – how the brain works.

When in a negative state, it’s hard for the brain to process and reflect, or be productive. Positive emotions are key. It’s not always possible to feel them, but it is possible to cultivate them.

How can we support people to be motivated to be productive? How can we help them to live better lives?

I set out to create a product centered around:

- What motivates people?
- What keeps people motivated, and what causes them to abandon their progress?
- Why do some turn to productivity apps for help?
- How do we help them carry on and make it to the finish line through the use of a productivity app?

People were also motivated by seeing and tracking their progress, and by rewards. It was easier to accomplish a task when they had seen the work they had already accomplished, and it was even better if they got something beneficial out of it. 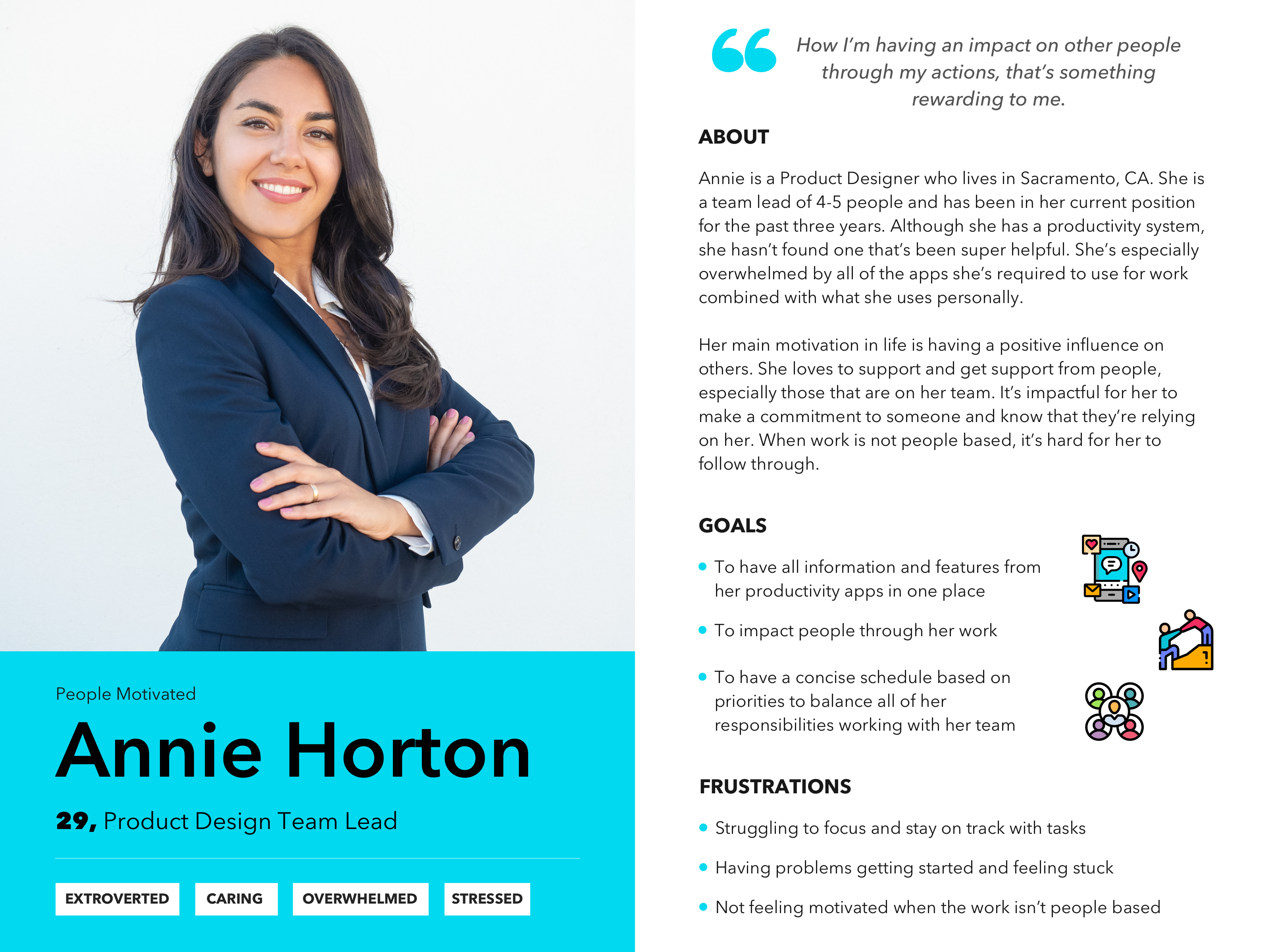 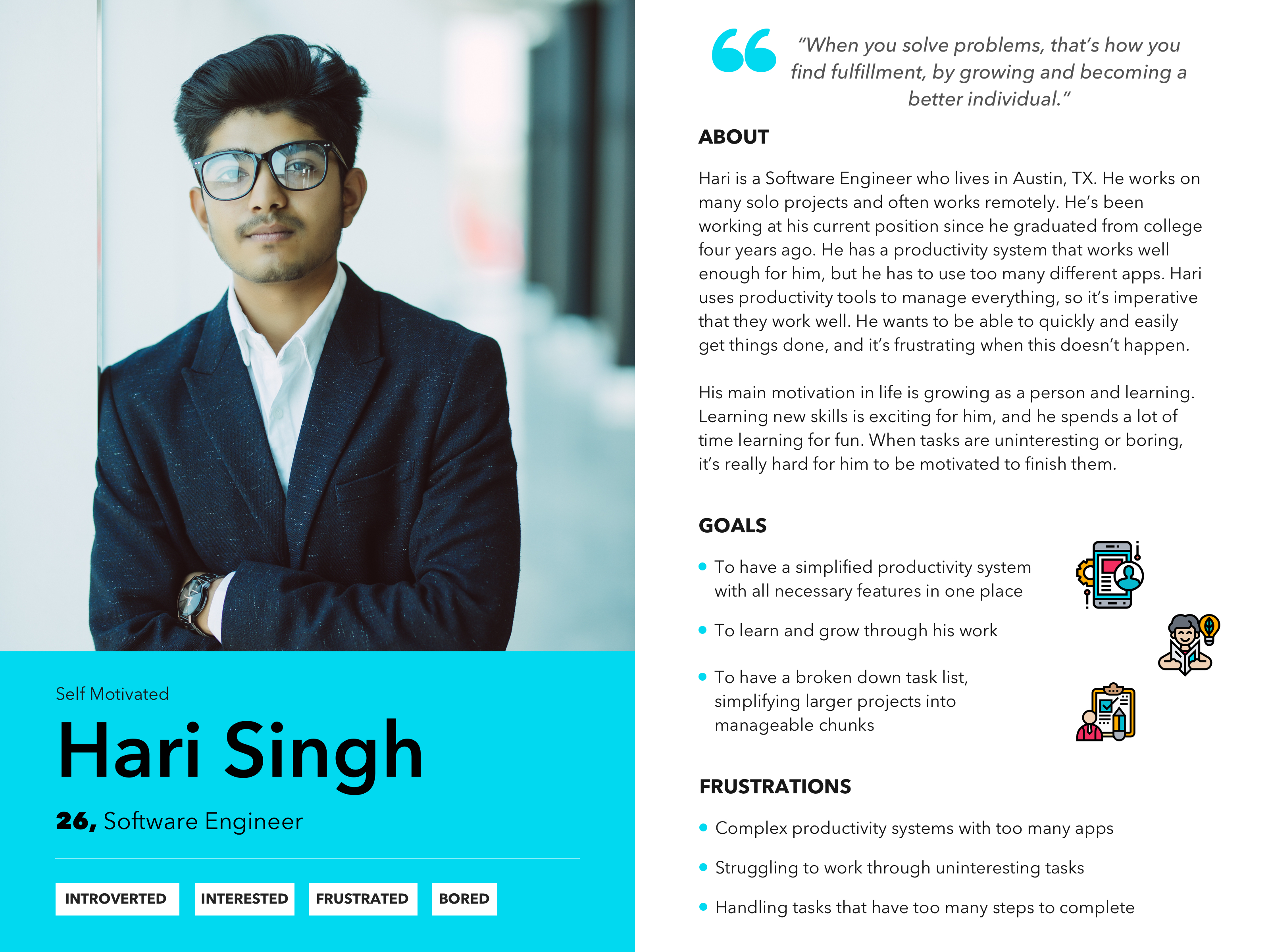 I was focusing on motivation, but more than just motivation came out of my research. What helps people be productive, not just be motivated to be productive? Being able to order their tasks based on difficulty level, breaking their tasks down into manageable chunks, and making a lot of lists all proved to be helpful.

What frustrates them? Time management issues, having trouble focusing, getting overwhelmed, and forgetting things do.

I analyzed all of this information via affinity mapping. 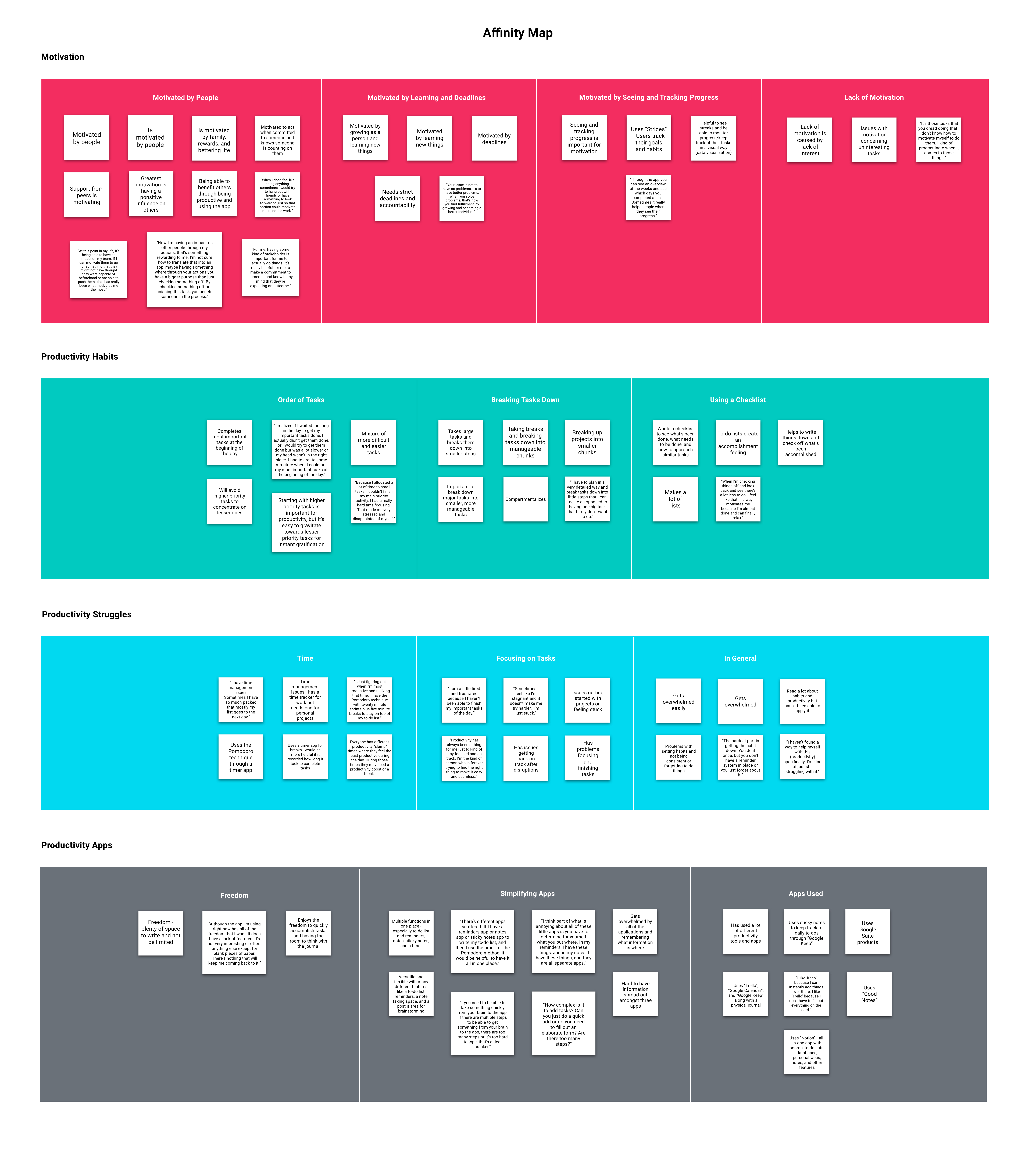 Give the People What They Need

To begin the design process, I did a competitive analysis. I concentrated on what had presented itself in the research, as several apps had been mentioned by participants. How were similar apps not fulfilling the needs of users, what were they doing right, and how could I use that information to best design Motivatask?

I focused on the issues that had come up combined with Nielsen Norman Group principles, such as user control and freedom. Just like in my research, I found that many apps were lacking in that department, such as the popular Evernote. Other apps like Habitica had good examples of giving users rewards – it was something I used for inspiration as I started thinking of ideas and putting together my early sketches. 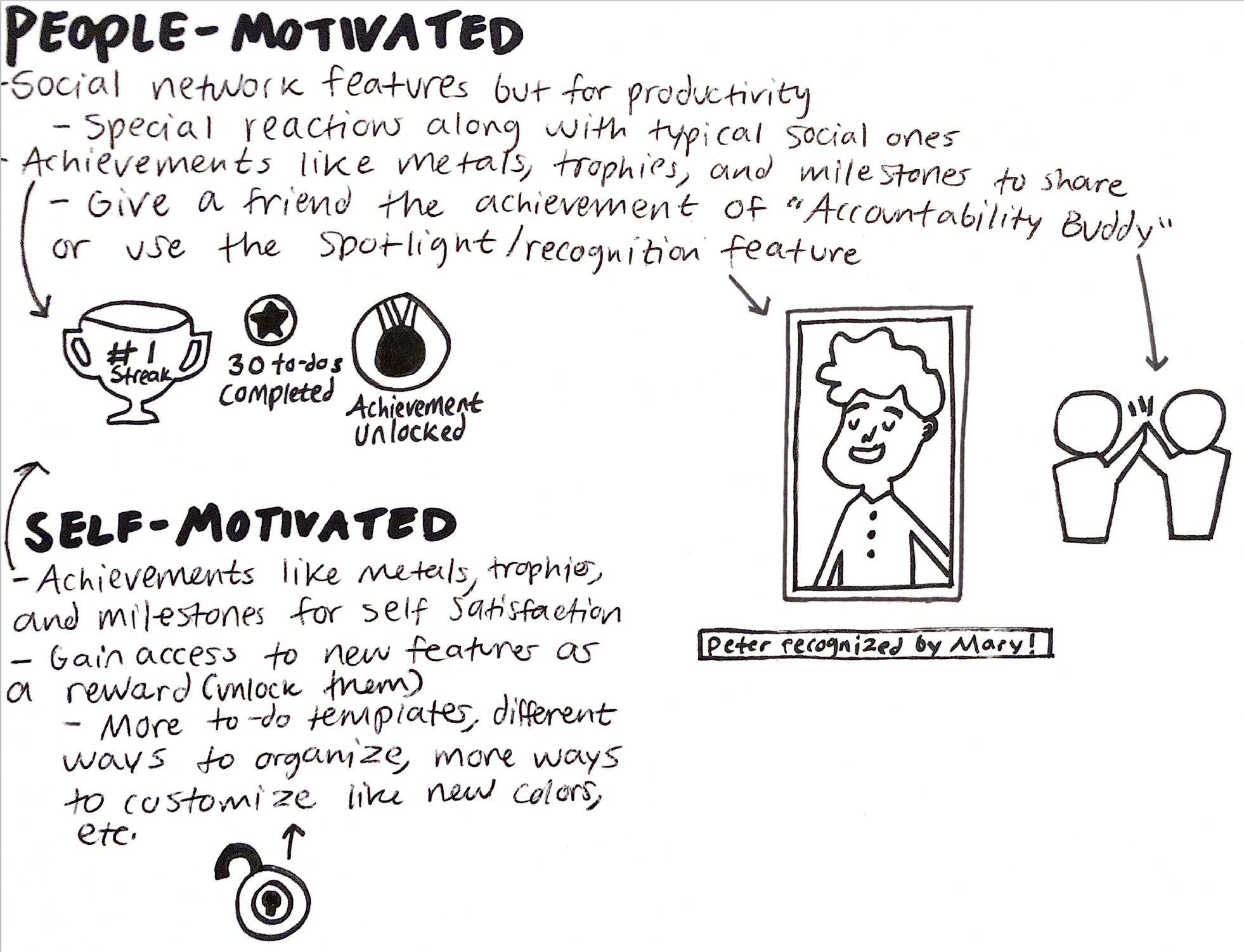 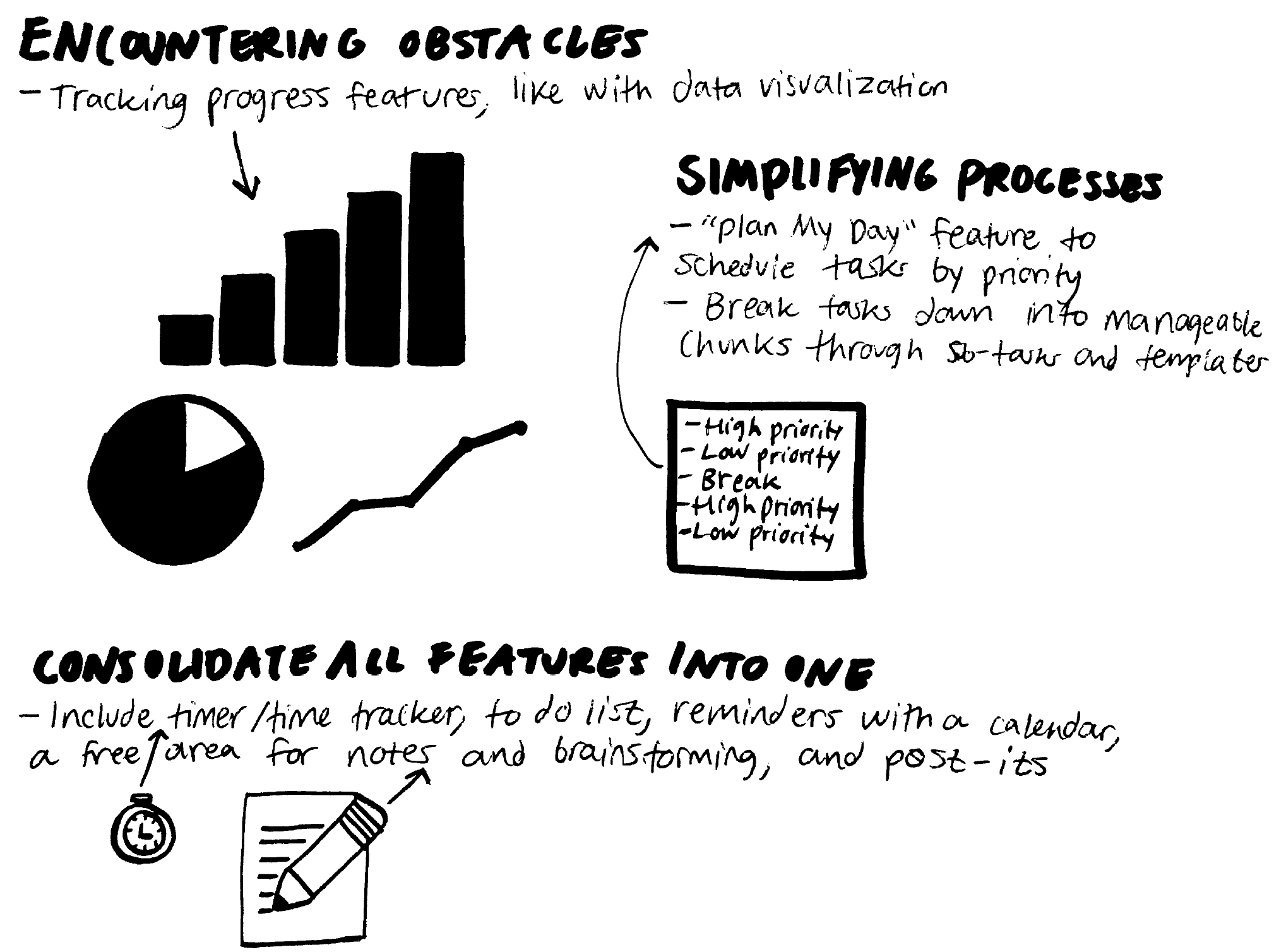 I originally thought of a social network format. When users shared their achievements with friends, they would show up in a feed where there would be typical features such as liking, commenting, and reacting. There would be some kind of recognition/ spotlight concept, where users could have “accountability buddies”.

For tracking progress, users could view data visualization. Other early ideas for supporting people when encountering obstacles were support forums and inspirational quotes and videos.

To simplify work processes, I came up with “Plan My Day” – this allows users to organize tasks based on priority. I also wanted to be able to break tasks down into manageable chunks, such as through pre-made templates and sub-tasks.

To make it so that users wouldn’t have to use multiple productivity apps, I tried to combine many features like a timer/time tracker, a to-do list section, reminders with a calendar, a free area for notes and brainstorming, and post-its. As I said in my my early notes, “The goal would be that users wouldn’t have to use any other productivity app. This would have to be done in a way so that all of the features are done well and not neglected, and the app doesn’t have a cluttered interface. The app would also have to be customizable to fulfill many different kinds of users’ needs.” The notes area was a homage to the need for freedom and for users to express themselves.

I made sketches based on these ideas to show to users and get feedback for the direction I should move forward in. 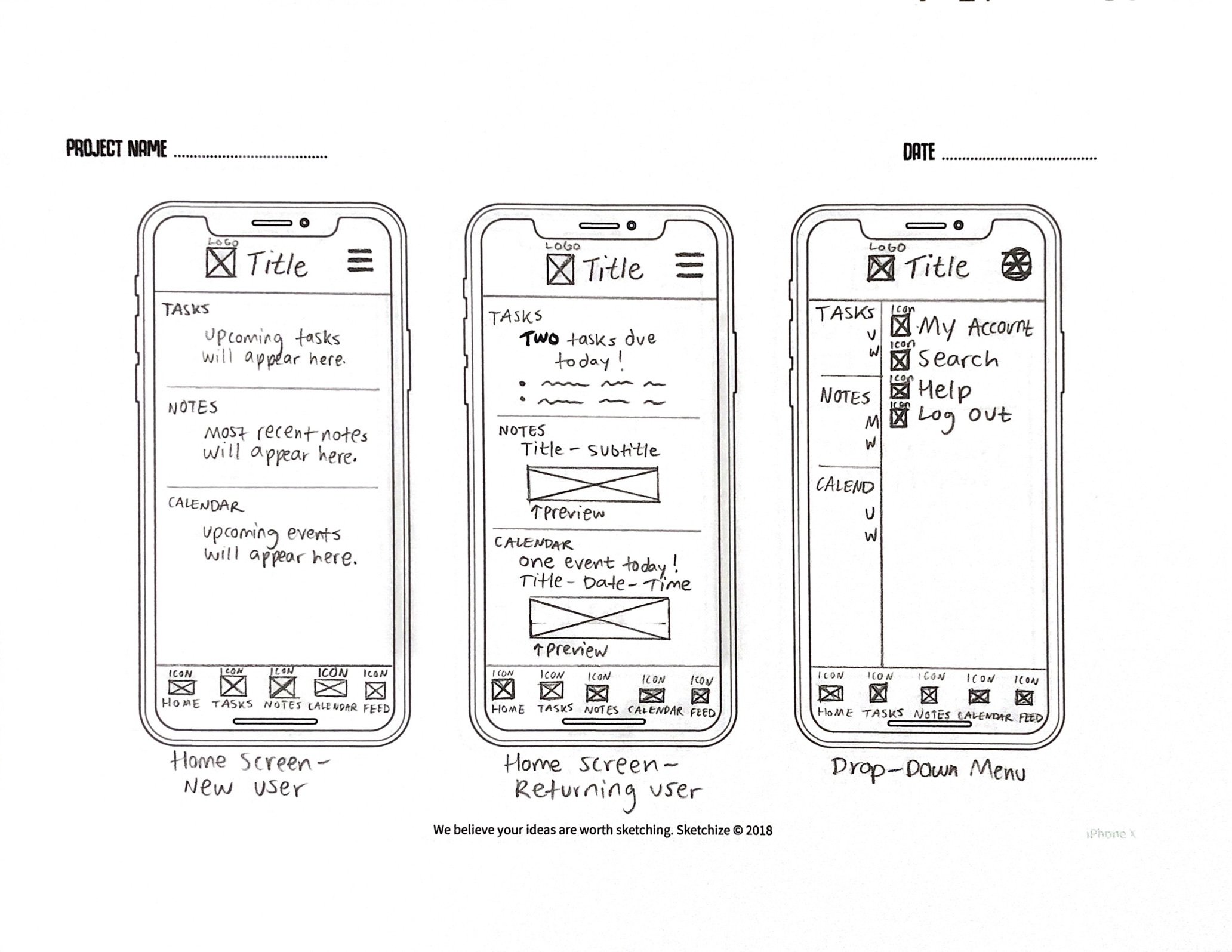 Users Are the Experts

The users are the experts, and doing guerilla user testing was so enlightening. I realized I had almost become a victim of feature creep. I could still give users an effective all-in-one app without including absolutely everything.

I removed the features that participants didn’t see as useful – the calendar, the timer, and the post-its. Instead, I added in deadlines and reminders for tasks. I scrapped the feed – users were interested in social features but didn’t want it to be like a social media platform. Connecting the app to already existing social media made more sense for sharing.

Users thought it was great to be able to work together with friends in the app though, such as by collaborating on note boards and tasks with them. Challenges with friends were mentioned a lot as a way to have some kind of accountability to other people and having to check in, instead of accountability buddies. Motivating and getting motivated by friends was very positively received.

I had gotten off track with the focus on motivation and hadn’t sketched out enough of that in detail. I thought about motivational responses for completing tasks and motivational messages on the home screen. I came up with a “Motivational Message of the Day”. 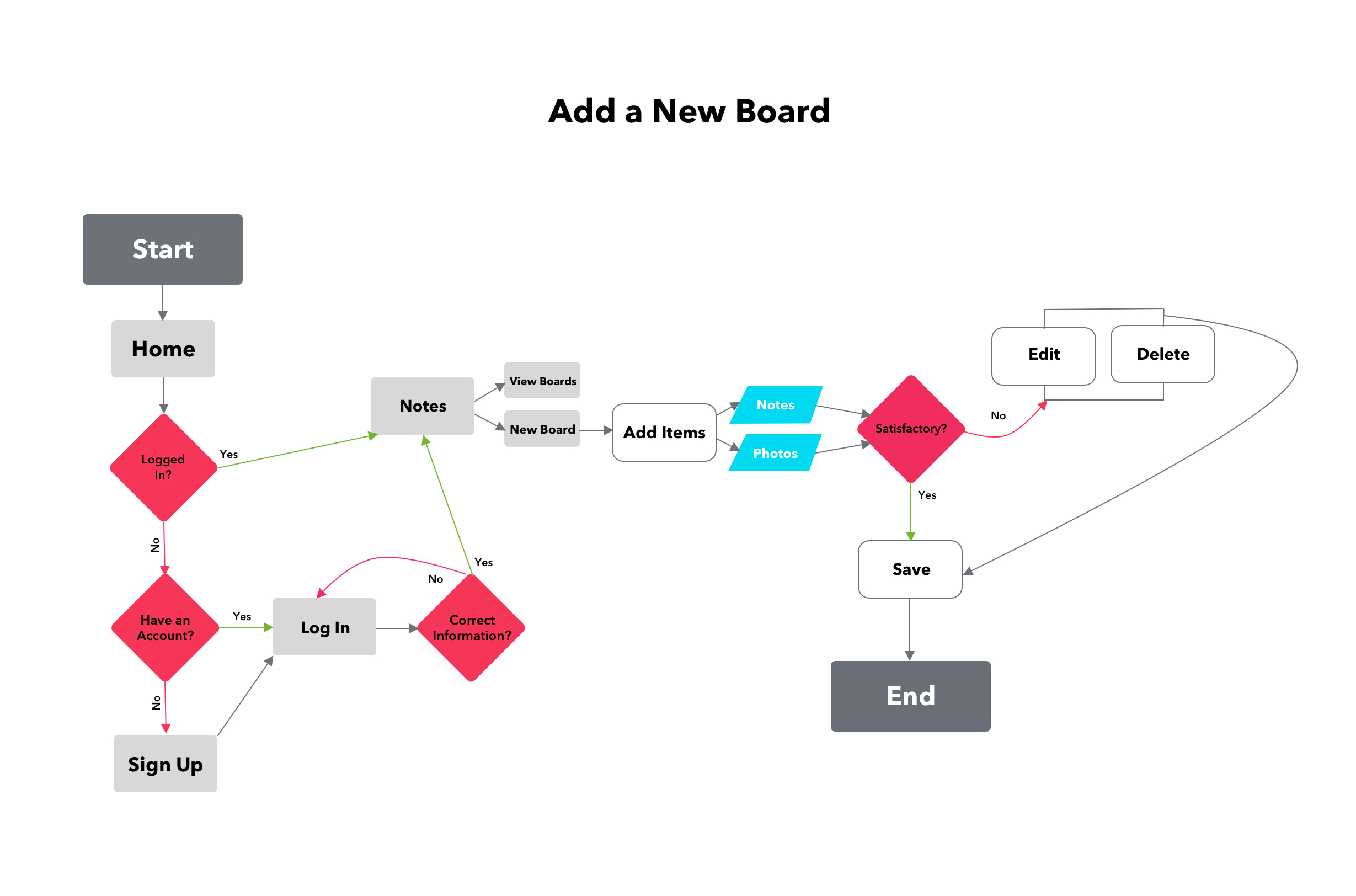 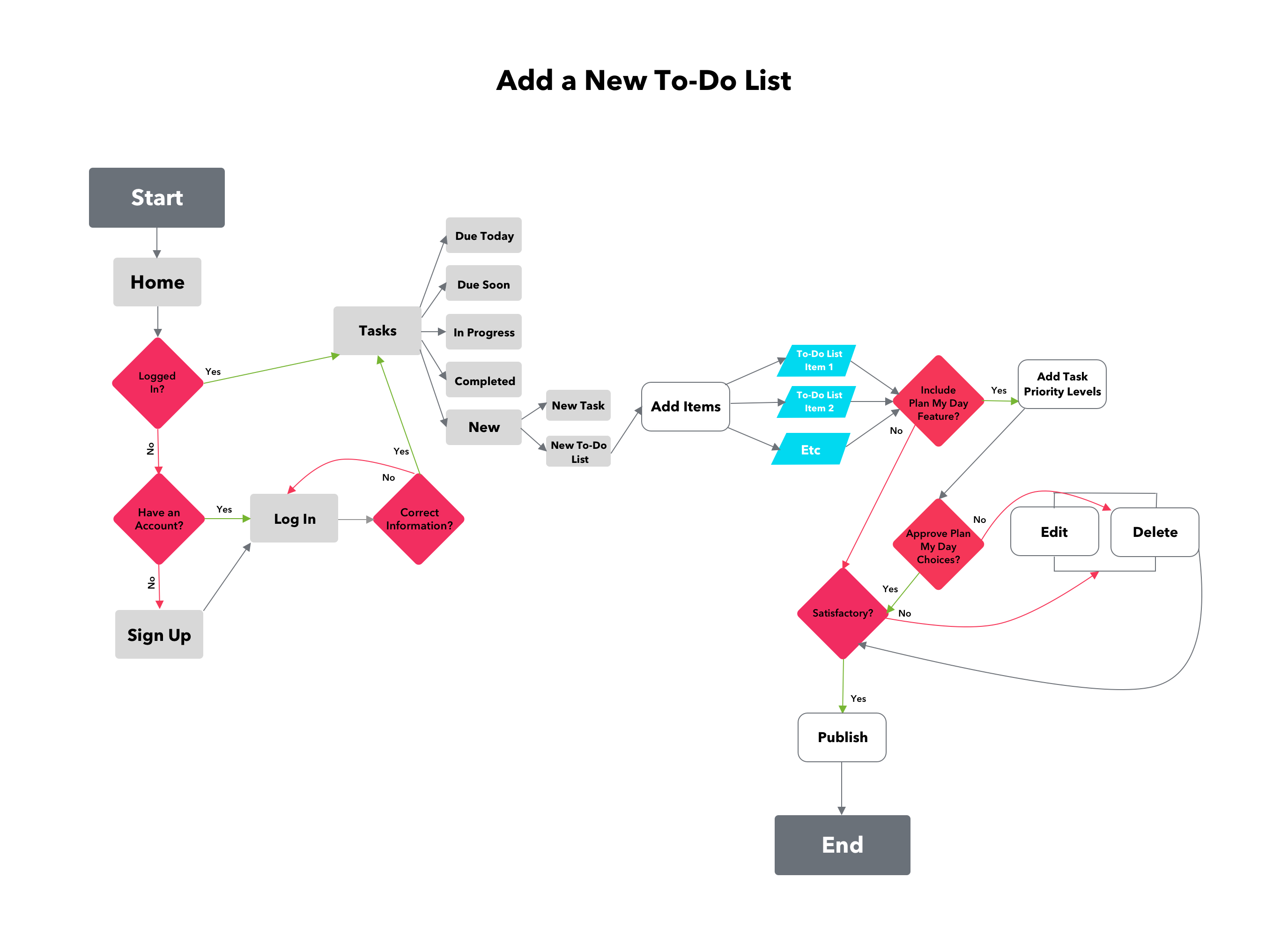 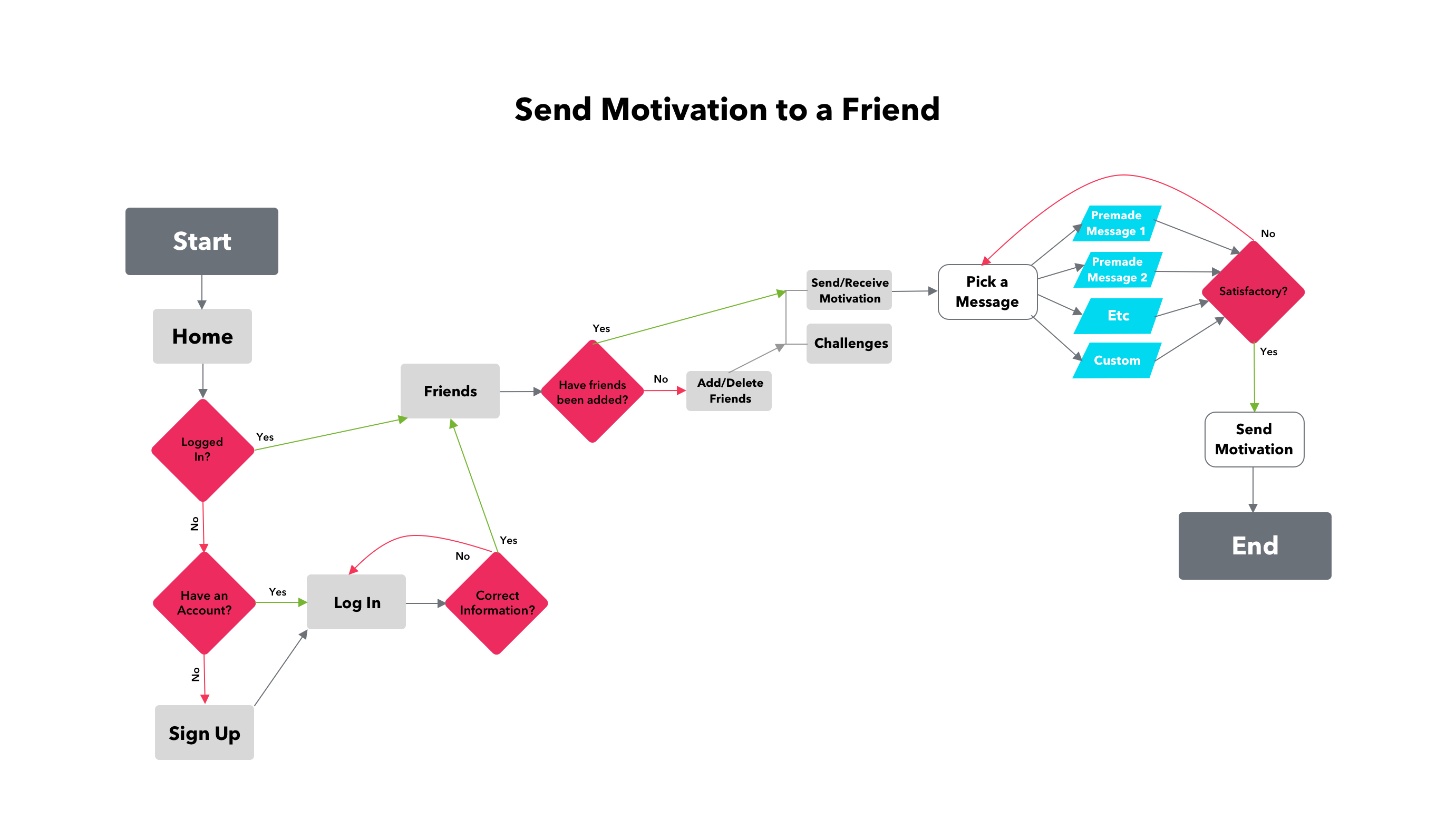 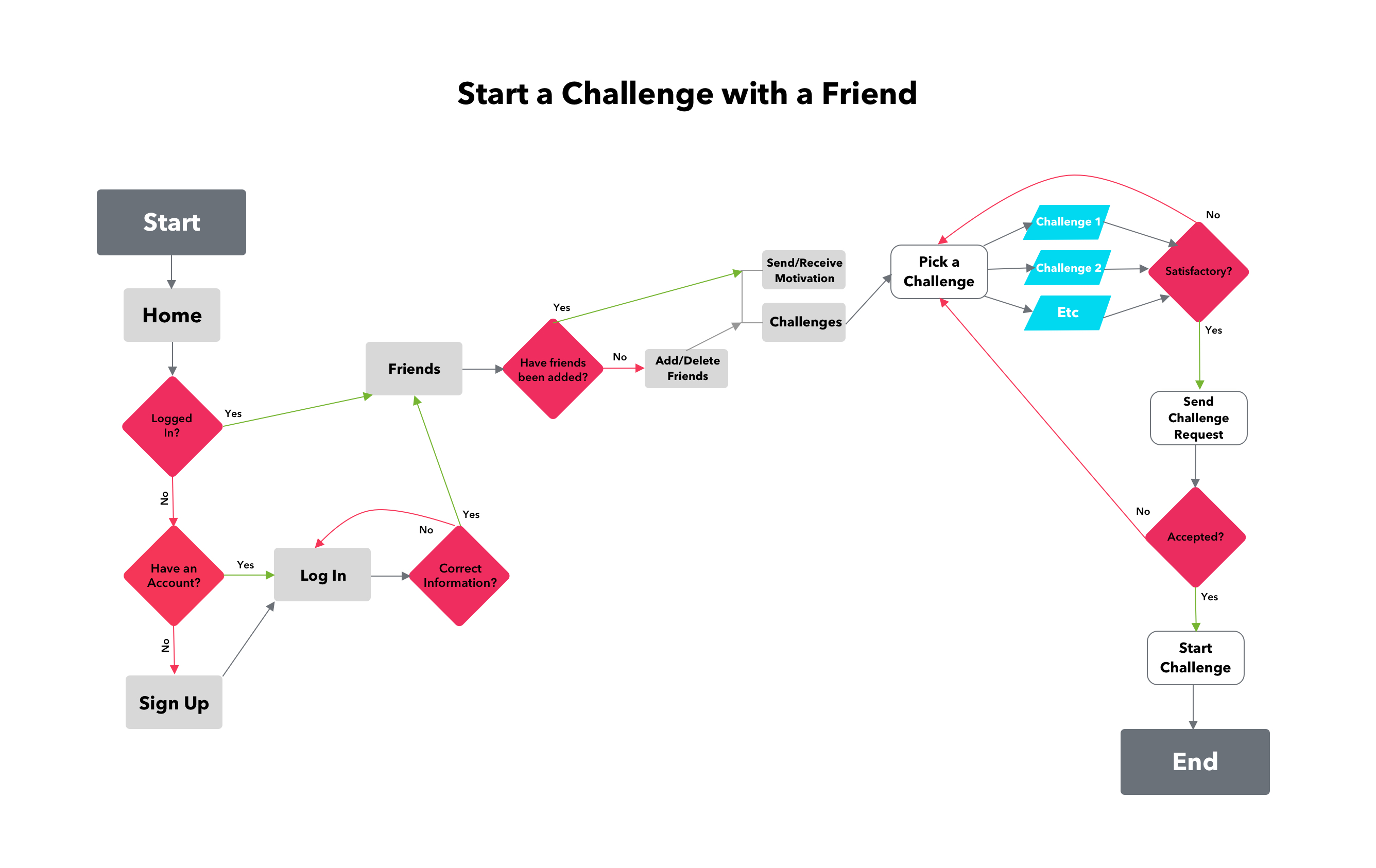 With all of the knowledge from my guerilla user testing, I worked on wireframes in Sketch to better communicate my ideas and focus on the direction I was moving in. I focused on three main features – Tasks, Notes, and Friends. Through Tasks, users are able to make to-do lists and individual tasks and add priority levels, additional notes, and deadlines. At the time, they were also able to add tags. They can view their tasks based on deadline, i.e. “Due Today” and “Due Soon” and get reminders on their home screen. The priority levels are for a “Plan My Day” feature that allows users to structure their day based on priority.

They get rewards in the form of achievements and motivational messages for finishing these tasks. Users will be able to view their progress through data visualization and also all of their achievements in one secure place.

Notes is a way to have complete freedom – it’s like a notebook. Users can write in pencil, pen, and marker, or regular text, as well as add photos. Most recent notes show up on the home screen. Finally, in Friends, users can challenge their friends and send and receive motivational messages.

I was super excited to show these to participants for usability testing. In comparison to my sketches, they barely looked like the same application.

Bringing the Style to Life

It was now time to work on the style.

I knew that for this project I wanted to communicate happiness and vibrance. Productivity comes from positive feelings for the brain, after all. I concentrated on bright colors, including a signature bright blue that became the main brand color, and illustrations – no photographs. I incorporated other bright colors into all of the illustrations, such as a beautiful bright red, green, and yellow. At Motivatask, we want to communicate energy, positivity, friendliness, and obviously motivation through our colors and illustrations. And also fun! I documented this in a mood board and style guide. 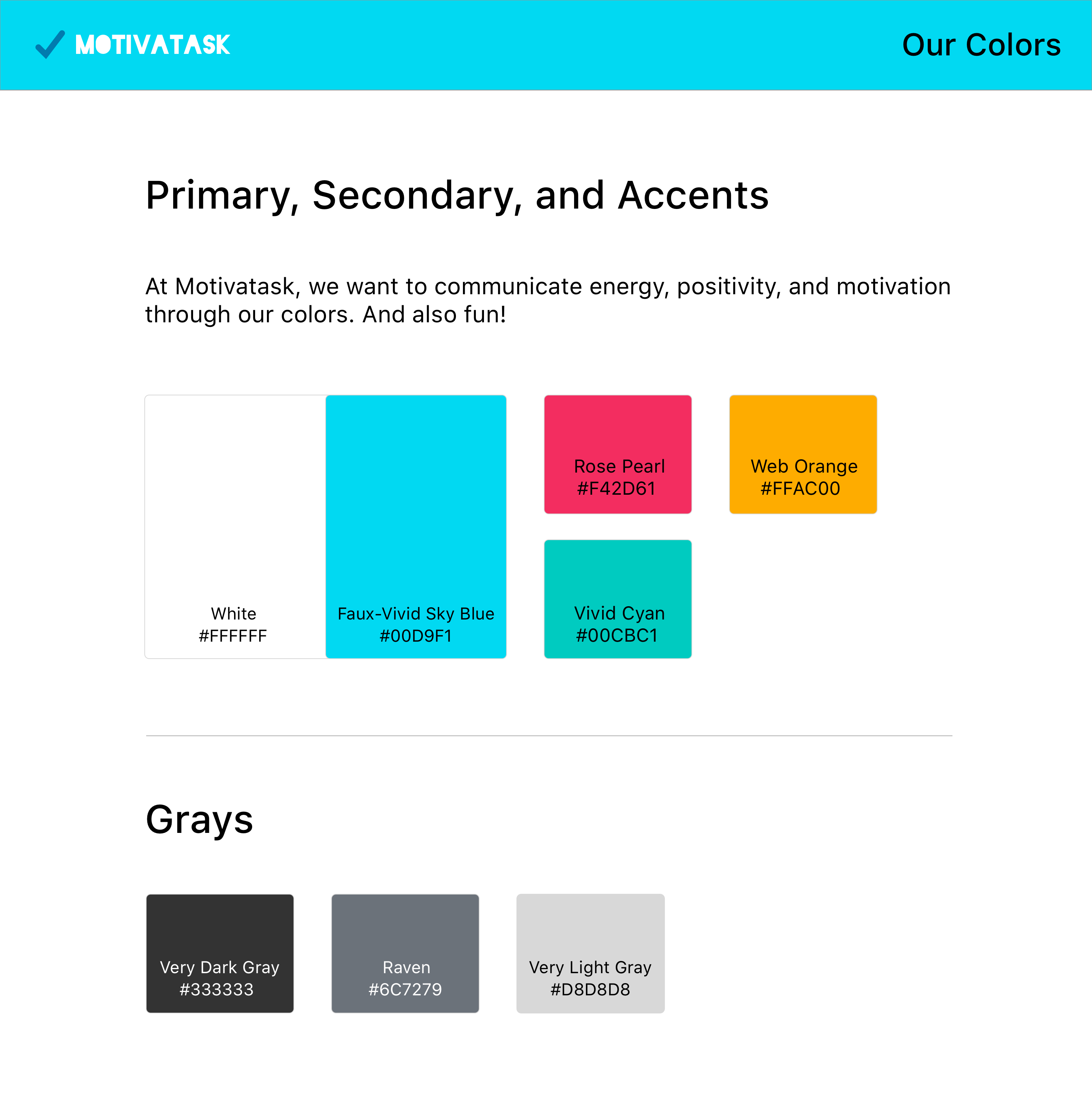 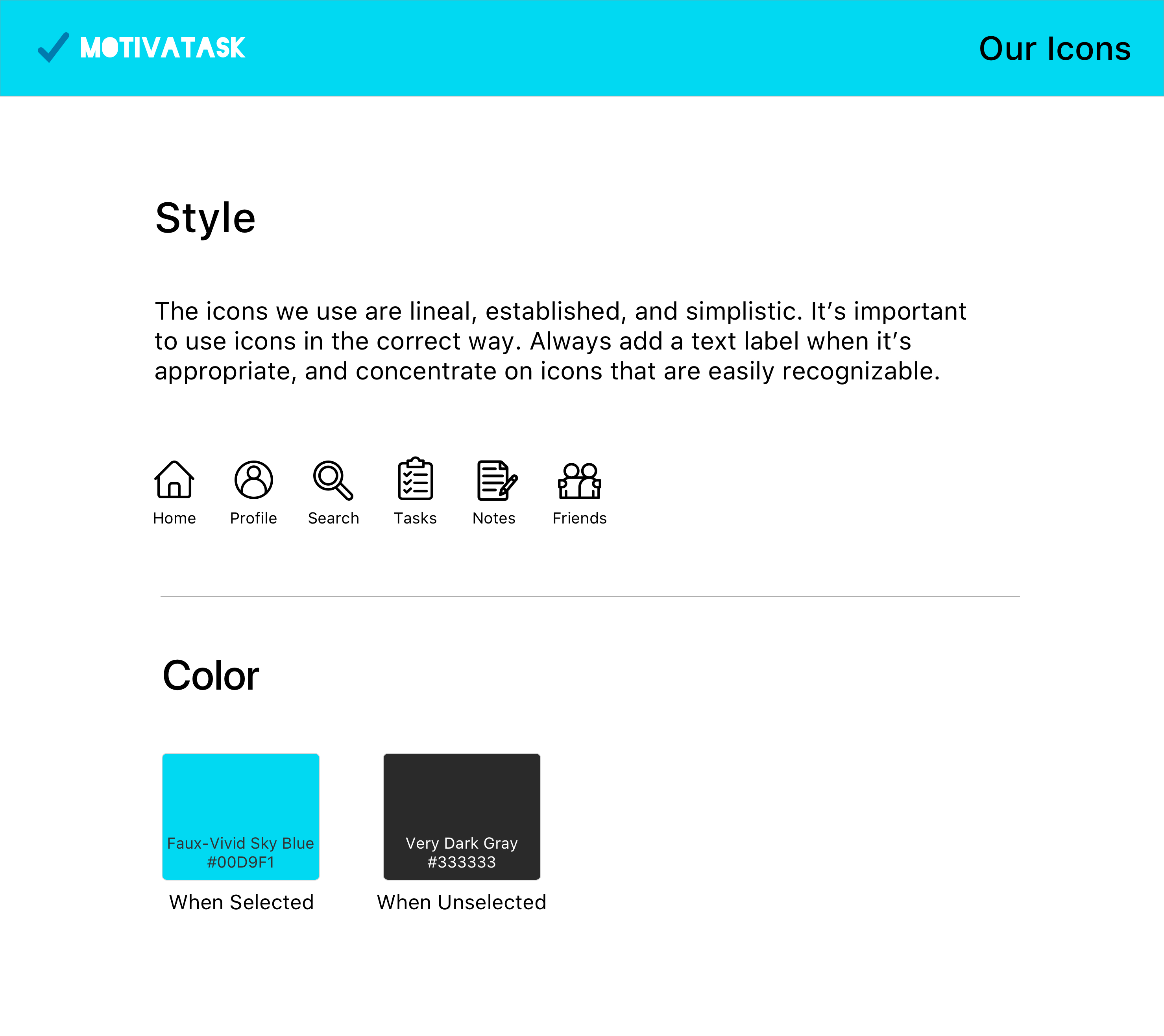 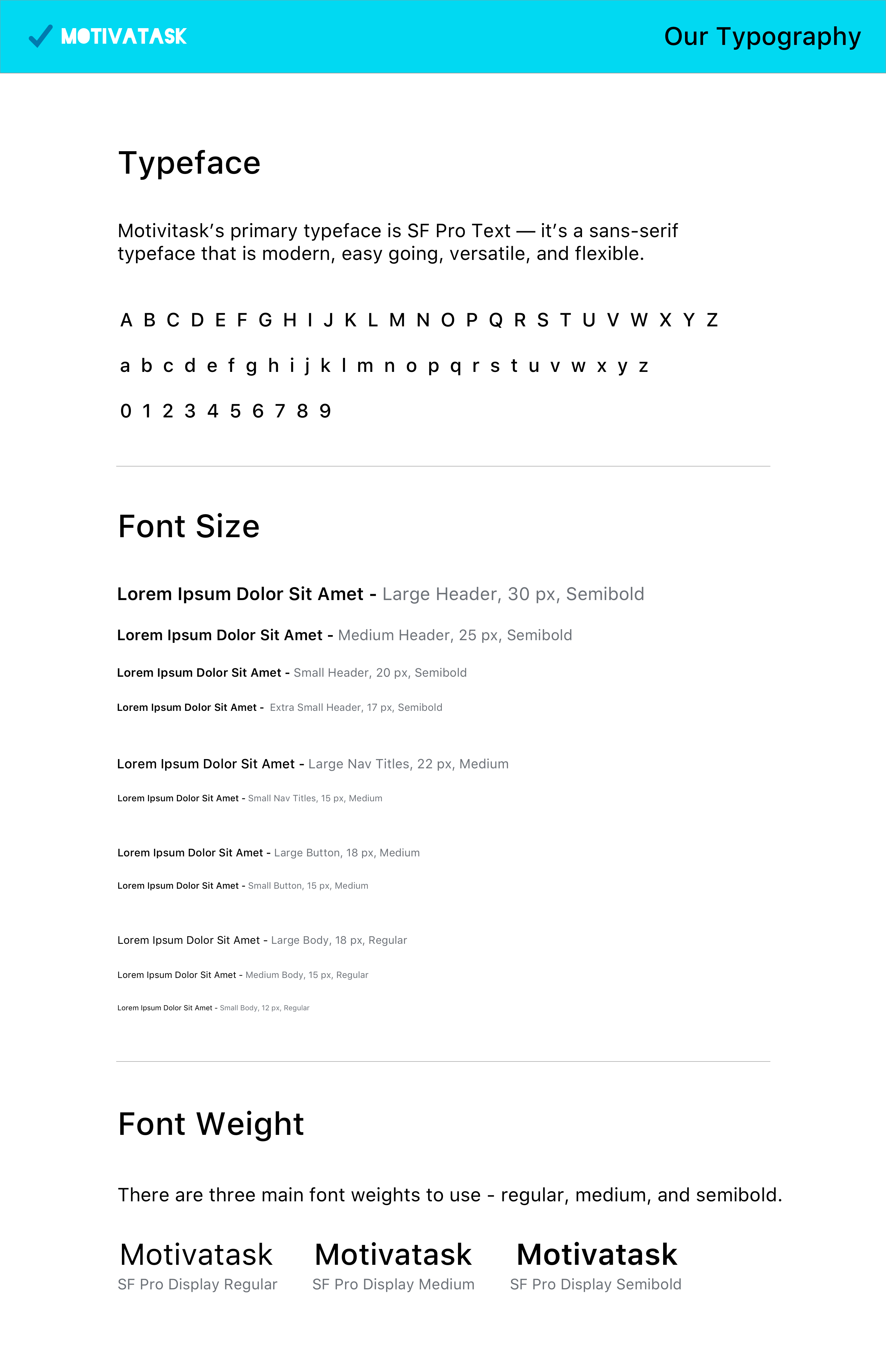 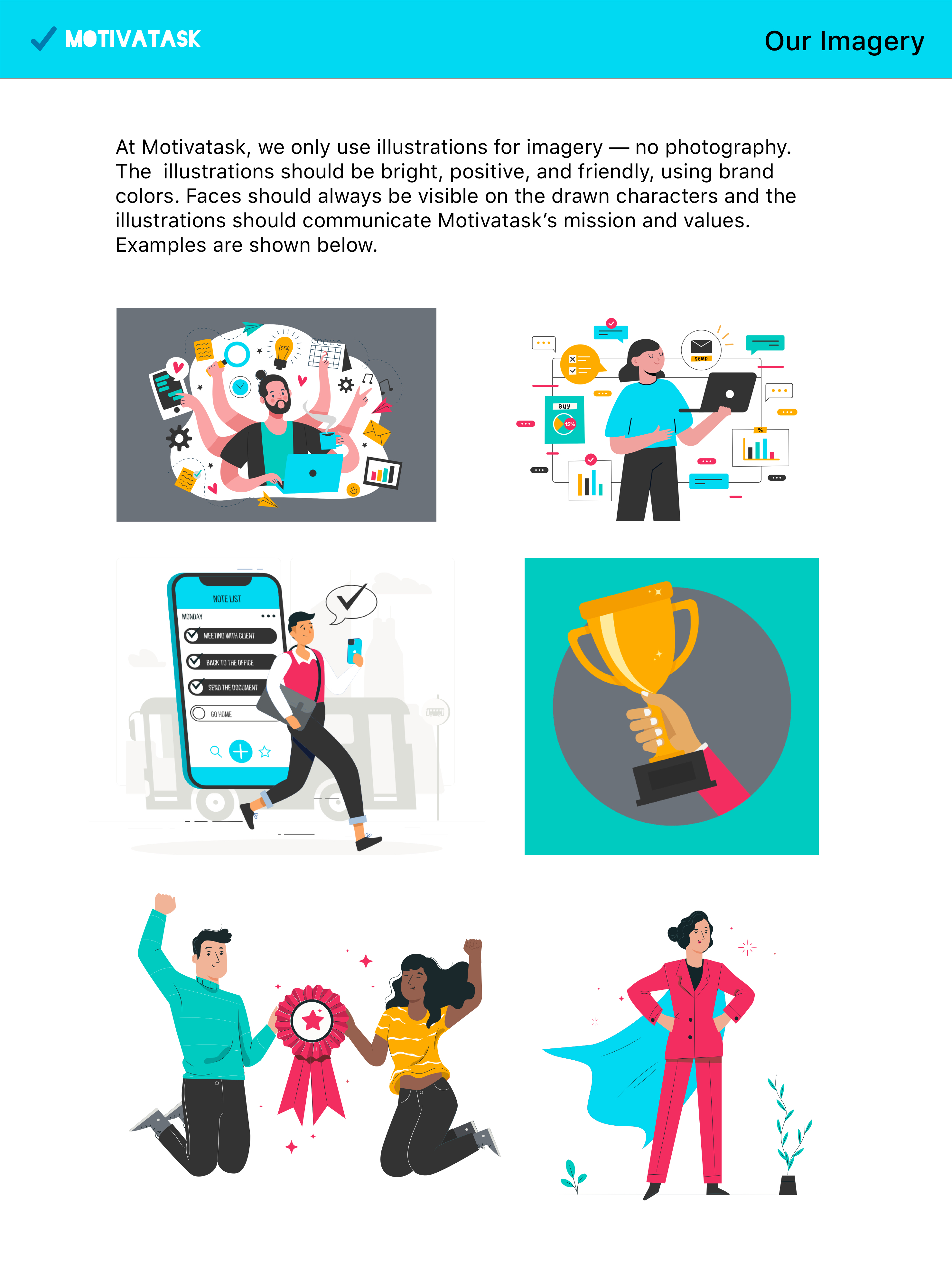 The name Motivatask is a play on words, combining task and motivation. The logo uses the signature blue and a check mark, to clearly communicate what it’s about.

I built out my high fidelity screens also using Sketch, and then did an accessibility audit on them, specifically focusing on visual issues. What good is an app if only certain people can use it? I changed some colors and then moved onto Figma for prototyping.

The Results of Usability Testing

I conducted two rounds of usability testing – each with five people, using a usability testing script I created. The first round turned up some concerns. For example, participants didn’t know if the “Motivational Message of the Day” was clickable or not. I had made it into a card, but there was no button, arrow, or any other indicator that it was interactive. There was a similar problem for the links under Tasks and Notes on the home screen.

The icons for the individual tasks were confusing. The users didn’t understand the labeling icon or the function of it, and the clock was seen as unclear. This was also true for “projects” – something I had included alongside tasks and to-do lists under Tasks, as a way to have multiple to-do lists together.

The system for messages needed to be changed. When tapping on the Friends tab, users could see if anyone sent them a message because a notification popped up. This turned out to be easy to miss. Users also wanted to be able to see more of the messaging system such as being able to view their old and sent messages.

There were a few other minor things, such as making the delete function more accessible and obvious, changing the way note boards were organized, and fleshing out the prototype more.

I got to work on all of the issues that had presented themselves, and also tweaked little things – like the sizes of buttons – to give the overall look and feel of the app an upgrade.

I added the word “View” with an arrow icon onto the “Motivational Message of the Day” and made the links on the home screen a version of the signature blue to make it clear what was interactive.

I took out the tagging system and changed the clock icon to a calendar to make it clear that it was about deadlines. I removed projects and decided to focus on tasks and to-do lists instead.

I also changed the messaging system to include an inbox where users could view their new, old, and sent messages. The challenges were originally under the account information, so I moved them to Friends and gave them a similar setup with sent, active, and completed challenges as well as challenge requests.

I brought the option to delete out in the open and changed it into a trash can icon. I also switched from a big save button to an auto-save feature, based on testing results. I fleshed out the prototype a lot more by adding a way to try out all of the tools in the note boards, for example. The note boards organization turned into a scroll feature instead of a carousel with a “View All” button.

Thankfully, the second round of testing went really smooth, with no issues. View my prototype above!

Overall, there was an overwhelmingly positive response. Many people contacted me asking when the app would be available for download, saying they could see the app becoming a “core part of their lives”. It was described as “colorful, engaging, and eye-catching” and one person said just looking at it made her feel happy.

I learned so much from creating “Motivatask”, mainly that without research, good design doesn’t exist. It’s extremely important to listen to the audience and design for them. Designers often get caught up in their own personal subjectivities, but it’s important to remember that we’re not the users.

Personal experience can definitely serve as inspiration though. When my mom passed away, I was the sole person in charge of her estate. I had a million things to do, and was grieving while trying to do them. I tried to use productivity apps, but they just made me feel worse as I checked off items on lists that never seemed to shrink.

My dream for this app is that it will help people, regardless of whether their task is something major like what I had to accomplish or something much smaller.

I’m proud of the work that I accomplished and can’t wait to see what happens next! Currently, I’m working with a developer to bring this app to life using mySQL and Flutter. I hope to expand the app and what it offers such as further developing the Friends section and providing more sophisticated data visualization for showing progress.